Rug Of The Day - Tomte the Elf 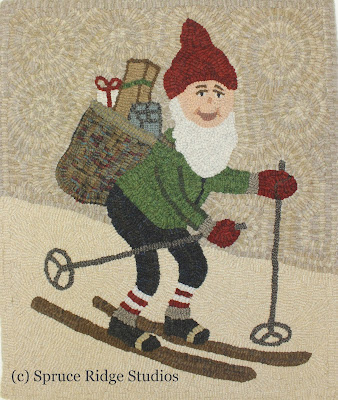 Tomte the Elf
Designed and hooked by Kris Miller

A tomte (Swedish) or tonttu (Finnish) is a mythical elf.  He is small and usually wears a red hat and has a beard (sort of like a garden gnome).  He is the guardian of one's house, barn, and animals and he makes sure they are taken care of.  It is good luck to have a tomte but don't make him mad!  He has a temper and if he is crossed, he will seek revenge on you and your household!  Tomte are most commonly associated with Christmas time and the Winter Solstice.  If you leave your tomte a bowl of porridge with a pat of butter on top, he will bring you gifts.

I imagined my tonttu with skis so that he could get around faster in the snow to deliver his gifts.  He is wearing the traditional red hat but I also gave him matching mittens and striped socks.

Notice that I used my favorite khaki plaid....not for the snow this time but for the sky.  I had not originally planned for the swirls in the sky but I realized that there was a lot of empty space up there so I drew in some swirls and gently echoed around them.  It was a last minute decision but it worked out to be a wonderful one!  It balanced out the quiet snow by giving some movement to the sky.

Here is a tip for hooking the basket:  I chose a plaid with several colors running through it.  I hooked one row around the basket to create the outer edge and then I hooked vertical rows, from the top to the bottom.

I have been taking Finnish language lessons on line for the past 4 weeks.  Believe me, Finnish is a very hard language to learn but I do practice every day. According to my app, I can say 224 words in Finnish.  Haha!  I speak like a toddler but I can tell you that I have a big white dog or that you have a small green car.  I can also order a coffee and a pulla bun too, handy for the next time I find myself at a cafe in Helsinki (pulla is sweet bread that is delicious with a cup of coffee.  You can eat it plain with butter but sometimes it is made into cinnamon buns or has a sweet cream cheese filling.  Yum!)

You can find the Tomte pattern here:
https://www.spruceridgestudios.com/product/tomte-the-elf-19-x-23-2/

Just a little under 5 months before Christmas arrives...time to start working on your Holiday rugs!!!
Posted by Kris Miller at 12:06 PM

Soon you will begin to have dreams where you are speaking fluent Finn. When you wake up you'll wonder if you really do understand and speak more of the language. That happened to me with the Icelandic language.