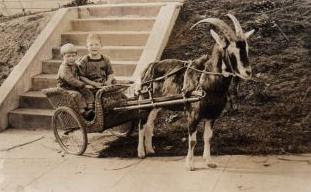 What's more fun than two boys in a goat cart???
A summer fiber extravaganza, of course!
I'm going to have a booth at the Fiber Arts Festival at Castle Farms in Charlevoix, Michigan this weekend...Saturday July 25th and Sunday July 26th. I'm really looking forward to seeing Castle Farms which was built in 1918 by the acting president of Sears Roebuck and Co. It was originally used as a model farm where livestock was raised and where Sears and Roebuck highlighted their newest farm equipment. Yes, the buildings look like a castle, with stone buildings, arches, and turrets. It has now been renovated to accommodate weddings, festivals, social events, and tours. What a perfect place for a fiber festival!!! Besides rug hooking (that's me), there will be lots of stuff for knitting, spinning, dyeing, felting, etc. There's also demonstrations of sheep shearing, sheep herding, llama obstacle course, a fashion show, and live music. Admission is $5.00. You can go to Castle Farms website to get more information. Charlevoix is a great place to visit, too, so jump in the car and drive up north! Sounds like a great week-end, doesn't it? I hope to see you there, but if I don't, I'll certainly have some pictures to post when I get home.
Have a wonderful wooly fiber week-end!
PS: I forgot to mention that I'll be bringing lots of freshly dyed wool and three brand-spankin'-new rug hooking patterns adapted from Lori Brechlin/Notforgotten Farm.
Posted by Kris Miller at 9:46 PM 4 comments: 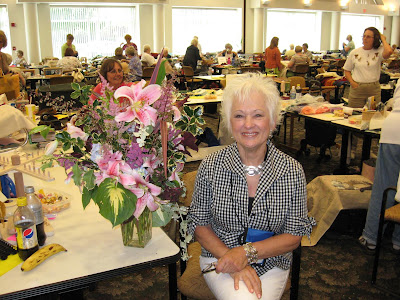 I just came back from visiting the Holland, Michigan rug camp...by the way, what a terrific and inspiring place for a rug hooker to spend some time! And even more lovely is Sibyl Osicka posing with her gorgeous bouquet of flowers! These were given by one of her students (actually, you can see her face just above the pink lily!) who grows them in her backyard garden! This was especially impressive to those of us (uh hum...I'm talking about me) who don't have a green thumb. Click on the picture to get a close up of the beautiful variety and colors of the flowers.
Posted by Kris Miller at 11:36 PM 2 comments:

I was washing up some fleece the other day and I thought you might like to see the difference between sheep's fleece and mohair. It is so much more apparent when you look at it in person! But I think you can see it here in these photos.... 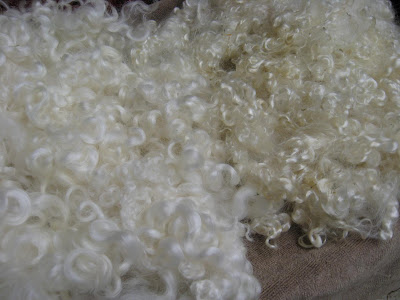 Emma's fleece (Wensleydale sheep) is to the left...and Zion's (Angora goat) is to the right. Zion's fleece has a bit more curl to it...but look at the shiny luster of his fleece! I think it sparkles like a diamond! Even though Emma's fleece is beautifully white, it has more of a matte sheen to it. The mohair fleece is much more slippery than a sheep's fleece and just a little bit trickier to hook with. But if you take your time, the results are wonderful. 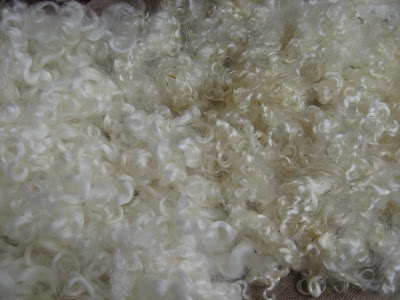 You might have noticed that Zion's fleece has little bits of hay and vegetation in it. Yup, that's a goat for you! It may be because the curls are tighter and trap a lot of hay. Or it may be because those goats seem to get into all kinds of stuff! Despite my best attempts to keep them "clean", I have seen them roll in the dust and dirt just days before we have to shear them!
Posted by Kris Miller at 11:32 AM 2 comments:

Happy Friday-Holiday Weekend to you all!
Here's the last group of pictures from my recent workshop in Alabama with The Wool Sisters! There were a couple of gals who had to leave early before pictures were taken and their rugs were equally as wonderful. 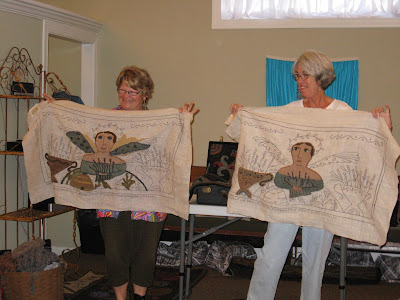 Here's Kate (L) and Bobbie (R). They were both hooking Herb Angel, a Notforgotten Farm adaptation by Spruce Ridge Studios. They did a fabulous job on the angels' faces, don't you think? 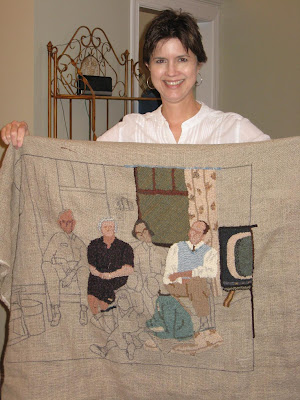 Ruth copied an old family photograph to design her rug. Just hints of facial features were used, and yet it gave each person their distinct personality. This rug is absolutely spectacular! I can't wait to see it completed. Isn't the old T.V. set cool? 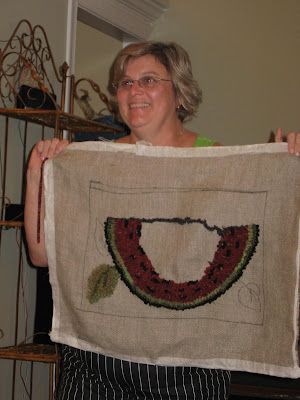 Jeanne learned how to rug hook while she was at the rug camp. She started on a watermelon design and was doing a really great job on her first rug....*applause*applause*!!! 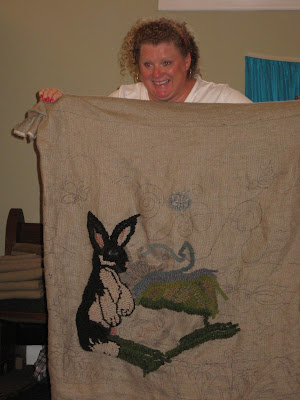 Kandy was working on a REALLY BIG bunny rug. Great job! I love the bunny! 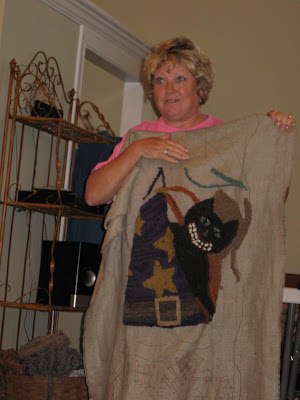 Sandy was working on her own design of a witch's hat, a cat, and a pumpkin. I love the way the hat is turning out. Isn't the cat's face charming? Love that smile! 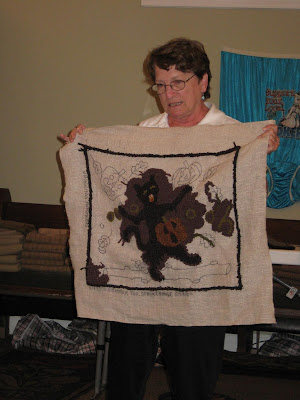 Sharon was hooking Juggling Pumpkins (this is a Keith Kemmer pattern available through Spruce Ridge Studios). Her cat and pumpkin look great....another wonderful rug!
~~~~
A very fun camp and a great group of gals! I hope you are inspired to get out your hook and get working on a rug!!!
Posted by Kris Miller at 6:08 PM 1 comment:

I've just gotten back from visiting my family down in Nashville, Tennessee and Cadiz, Kentucky. I had so much fun and we kept so busy that I hardly took any photos at all! We did lots of sight-seeing, eating out, and shopping!
~~~
The handsome man on the left is my son, Kevin. I'm on the right and the guy in the middle is THE famous Jack Daniels! We all took a tour of the Jack Daniels distillery in Lynchburg. I'm not a whiskey drinker but the tour was fabulous and I have a new appreciation for the making of whiskey. And even though it's known as a "Tennessee sipping whiskey", our tour guide "Miss Bettie" told us that she substitutes equal parts of Jack Daniels whiskey for vanilla in all her recipes and you can't tell the difference. 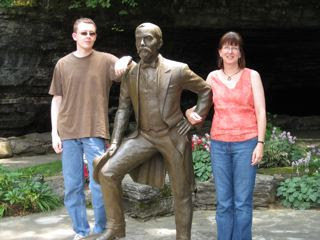 Here are a few photos of the Carter House in Franklin, TN. My son is interested in Civil War stuff so we walked around the grounds of Carter House where the Battle of Franklin took place. 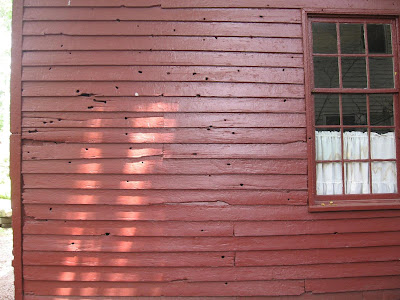 Above is the farm office of the Carter House. There are over 200 bullet holes in the side of the building. Some of them went straight through the building and you can see the exit holes on the other side. 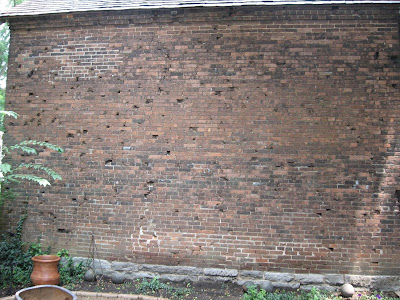 Above is the back wall of the smoke house at the Carter House. Again, so much bullet damage from the battle! 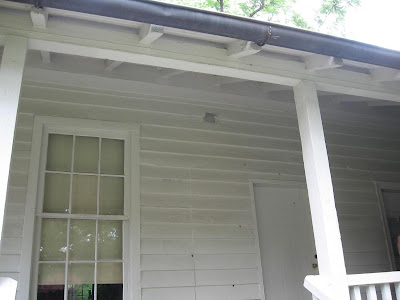 We found this particularly fascinating...if you look up toward the top of the wall, you can see where a cannon ball tore into the house! The hole was patched over it with some wire and you can also see bullet holes on the wall. The Carter family took refuge in the basement of the house while the battle raged outside.
~~~
It was hotter than blue blazes while I was down South....so glad to be back in cool, cloudy Michigan!!!
~~~
I'll post "Part 3 of Sweet Home Alabama" tomorrow!