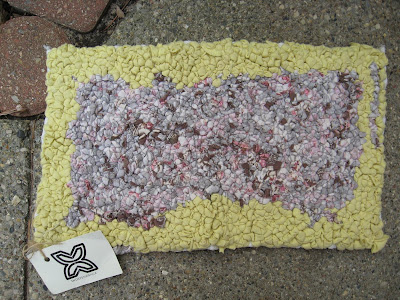 I have felt a little like a rug hooking "gypsy" this summer, for as much traveling and hauling of my wares that I have done!  Sadly, I have not kept up on my blogging of all the special places I've been.  So this blog post is dedicated to the workshop I recently taught for the Buckeye Rug Hooking Guild.
True Confession:  I forgot my camera and was not able to take pictures of my class or their rugs, but let me assure you that every rug was a winner!  I was team-teaching with Wendy Miller of The Red Saltbox and I always have a wonderful time when I am with Wendy!  She is an equally wonderful teacher and some of her color plans would blow you away!  Just to prove I was there, you can follow this link to Rhonda's blog and there is a picture of me and Wendy!  We were in a beautiful ballroom and I'll bet that we totally exceeded the legal limit for the amount of wool that is allowed at a workshop (wink, wink)!
Anyway, the highlight of the week-end for me was the auction that the Guild put on.  I spotted a humble little rug on the table and recognized it immediately...and I was NOT going home without it...
I won this little treasure of a rug that was made in The Gambia (Africa) at the GOVI School for the Blind.  It is a charity that is headed up by my friend Heather Ritchie, from Reeth, UK.  I follow her newsletters about the GOVI school and have really longed to own one of the student's rugs.  And I thought that ownership would be nearly impossible until I spied that little treasure at the auction.  So now it resides here with me, and I hope to have my husband frame it soon so I can display it properly in my studio. 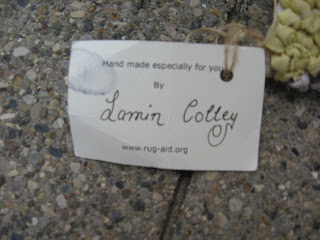 Here is the precious little tag that is attached to the rug by a piece of string.  The maker's name, Lamin Colley, and his/her fingerprint...a special autograph since the maker was blind.
You can check out Heather's charity here:  Rug Aid
The happiest part of the story?  The Buckeye Guild agreed to donate my winning bid entirely to Heather's charity.  It's a win/win situation with a happy ending!
Posted by Kris Miller at 2:35 PM 5 comments:

On The Road Again!

I'm hitting the road again to vend at a wonderful fiber show in picturesque Charlevoix, Michigan!  It's this week-end so make your plans now!
Saturday July 24th  10 am to 5 pm
Sunday July 25th 10 am to 4 pm
Fiber Arts Festival at Castle Farms
5052 M 66 North
Charlevoix, MI  49720 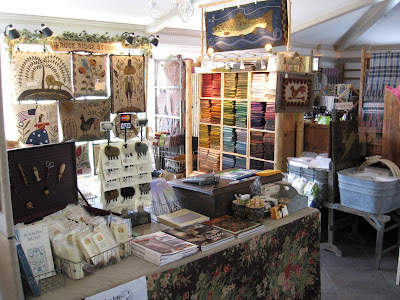 We set up a great booth last year and I am SO looking forward to being there again this year!  It was fun, fun, fun!!!  I have been feverishly preparing lots of goodies for the show.  And I'm so excited because I just got in the most WONDERFUL textured woolens (I'm washing them up right now), and I'll be bringing them along.  I'm not kidding, my heart skipped a couple of beats when I opened up the boxes!!!  I'm already color-planning in my head, thinking about using these gorgeous textures for my next project! 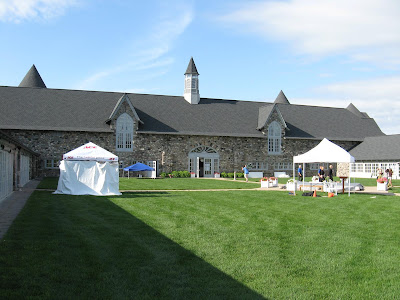 This is the courtyard at Castle Farms.  The whole complex looks like Olde English stone buildings and yes, there is even part of it that looks like a castle.  A truly fascinating place to visit.  You can go to their website and get more information and see a few more pictures too.
http://www.castlefarms.com/
Be sure to scroll down toward the bottom of the page for the link that gives more information about the fiber show.
All the vendor booths are inside (air conditioned!) and the courtyard pictured above is used for the fashion show, demonstrations, and more.
If you come to the show and mention that you read about it on my blog, I'll give you 10% off of any one regular-priced item in my booth.
See you there!!!
Posted by Kris Miller at 1:14 PM 7 comments: 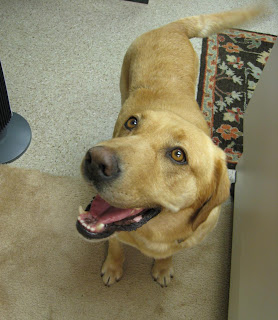 Meet Jackson....he is the newest member of the Miller/Spruce Ridge clan!  He is a 6 year old Yellow Lab that we adopted today from a rescue group.  Crazy, isn't it, that I have gotten a new dog so soon?!?!  It just sort of happened at the last minute....my son and I stopped by one of their "pet fairs"  yesterday and talked to Jackson's foster mother.  We hit it off right away and realized that Jackson had the personality we were looking for.  Ken and I went back today and brought Jackson home.  He has been a little clingy but the poor guy has been through a lot!  He spent the afternoon playing catch and then cooled off in my studio.  His tail was wagging the entire day.  I think I have a new rug hooking buddy.
~~~
The name "Jackson" brings back a funny little story....
~~~
Several years ago, I was going to teach a rug hooking workshop in Mississippi.  I arrived at Detroit Metro Airport for my flight and the ticket counters were mobbed with travelers.  I patiently waited in a long line and finally reached the kiosk at Northwest Airlines to check my bags.  All the agents were really  busy so I did as much as I could on their check-in computer, and then had to wait patiently again for the computer to spit out my paperwork so an agent could weigh and tag my suitcase.  A woman behind the counter called out:
"Jackson!"
No one stepped forward.
"JACKSON!!"
I looked around...where was this Mr. or Mrs. Jackson person who wasn't responding?
"JACKSON!!!!"
I realized that the agent was looking right at me with a stern look on her face...
I pointed to myself...."I'm Miller"
"YES....WELL, ARE YOU GOING TO JACKSON ??!!!"
oH dEAR!  Yes, I was ..... going to Jackson Mississippi....eeeps!
I sheepishly handed over my suitcase while wishing that I could melt into the floor.....I think I mumbled something about not traveling much on them big ole' air-o-planes.....
Posted by Kris Miller at 1:49 AM 10 comments:

Here is a group picture of my class in Manistee: 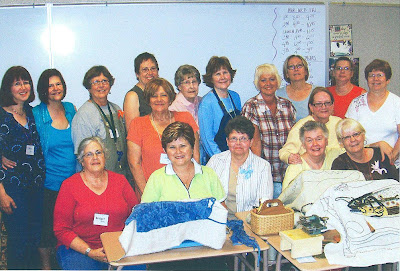 A really terrific bunch of gals...we all had so much fun! 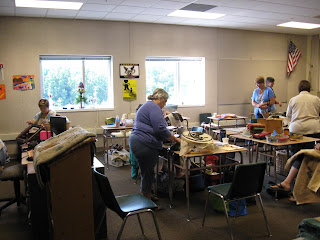 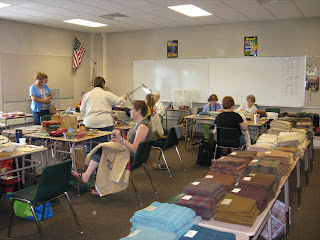 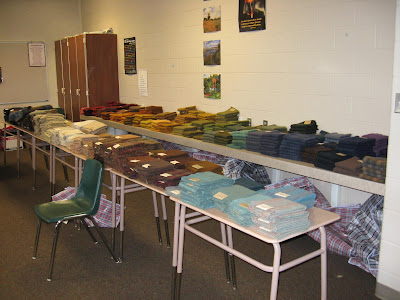 I definitely won the prize for bringing the most wool!
~~~~
During my stay in Manistee, I was also very lucky to be able to visit the studio of Evelyn Sorenson.  She is a 95 year old fiber artist who creates the most beautiful tapestries that you have ever seen.  She works them in her own special technique; the backgrounds are loosely woven mohair yarns and the embellishments are embroidered on the woven yarns with more mohair.  Most of the tapestries are quite large.  I'm sure you will agree that they are absolutely incredible (Buckle your seat belt, I took lots of pictures): 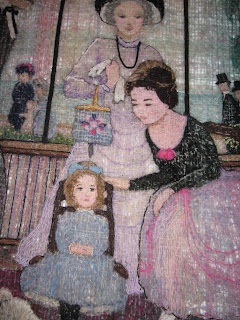 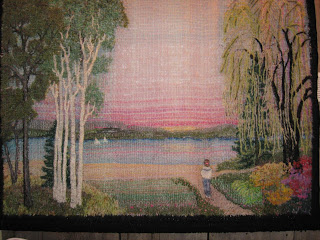 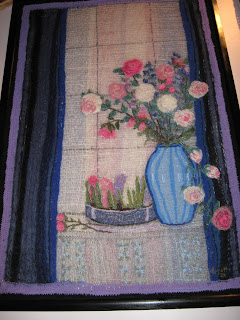 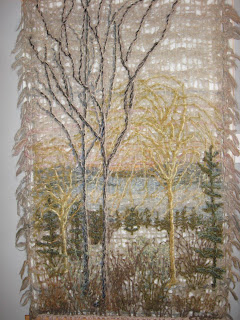 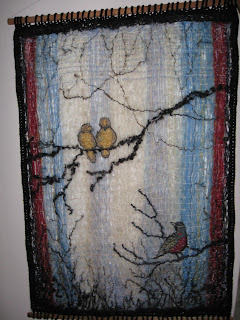 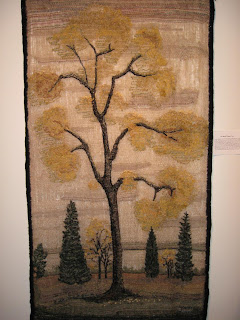 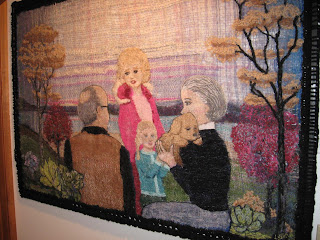 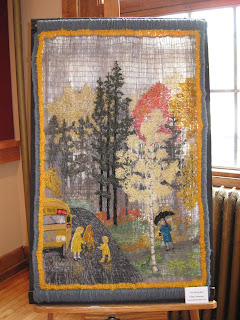 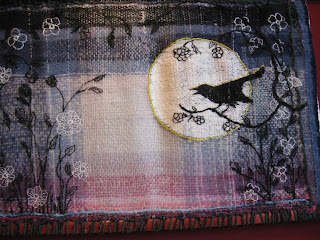 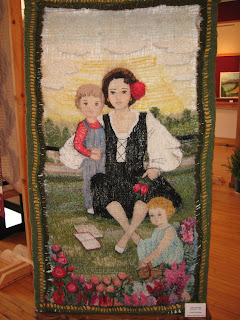 It's hard to pick a favorite but I think the last one might be the one I like the best.  Which is your favorite?
~~~
A heartfelt thanks to all of you who wrote such warm and touching words of sympathy about Nokie.  I still expect to see her when I look out the window.  She will always be in my heart.
Posted by Kris Miller at 11:06 PM 3 comments:
Newer Posts Older Posts Home
Subscribe to: Posts (Atom)