I flew down to Nashville on January 3rd to visit my sister Amanda for one week. One of the most hilarious parts of my visit was taking the Nash Trash Tour! You climb aboard a big pink school bus and for the next 90 minutes, you are entertained by Sheri Lynn and Brenda Kay....The Jugg Sisters! They guided us through the streets of downtown Nashville (Bubba was our bus driver), pointed out famous landmarks, and dished the dirt on Country stars! I never laughed so much! If you are ever in Nashville, make sure you book a seat on the pink bus! Their website is http://www.nashtrash.com/ 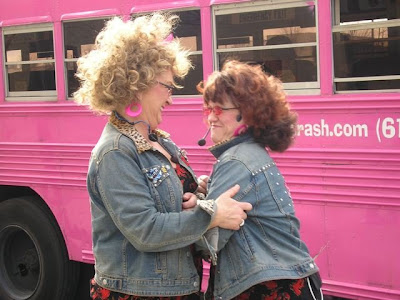 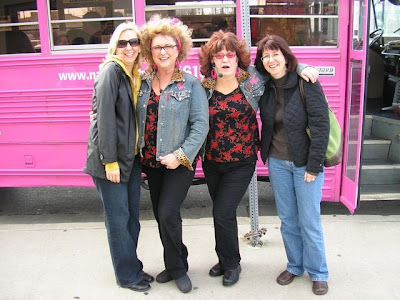 (left to right) My sister Amanda, Sheri Lynn, Brenda Kay and me in front of the big ol' pink bus!
On a more serious note, we also drove up to Cadiz, Kentucky to visit with my dad for a few days. One of our favorite things to do is go for a hike in the woods. There is a river bed at the bottom of the hill and when it is dry, you can find the most fascinating fossils and geodes (little tan, globular, round rocks with crystals inside). I love their color and texture. It was a lucky day for me....I collected enough geodes to fill a small jar! 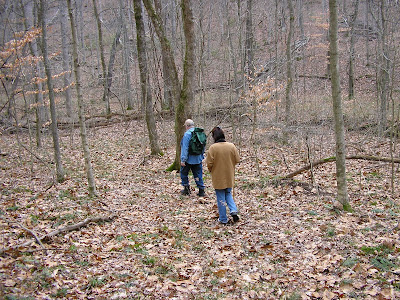 My dad and I hiking down the hill to the river bed.
Posted by Kris Miller at 9:39 PM No comments: 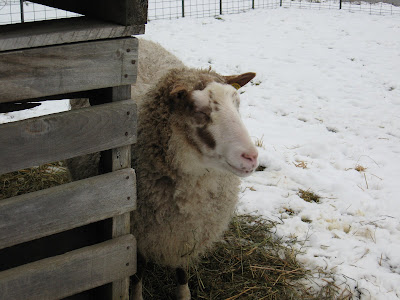 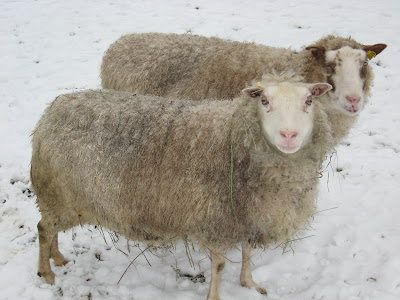 This is Lumi and Mikko. They are my two Finn sheep. Lumi (in front) is a ewe (girl sheep) and her name means "snow" in Finnish. Her fleece is white. Mikko is a wether (neutered boy sheep) and his name is a typical Finnish boy's name, I imagine something like Michael. There is a little "sheep humor" that goes like this: Neutered boys are called wethers because "they don't know whether they are a boy or a girl"!!! Lumi is quite a celebrity here because the fleece from her first shearing won Best of Show at our county fair. Mikko's fleece is considered a "fawn" color and when I spun up some of his wool, it was a creamy oatmeal color. Wonderful!
On New Year's Eve, Mikko had surgery for a urinary blockage. This is a serious condition for wethers and often times the animal has to be euthanized. I could not bear to put him to sleep right at the start of the New Year so I decided to go ahead with the surgery. The first few days after surgery were touch and go because Mikko wasn't eating. It was discovered that he had a fever, and blood work showed that he might be in kidney failure. Since I was out of town, my dear husband had to nurse Mikko along without me. The vet gave Mikko another antibiotic. Slowly, Mikko has improved and I'm delighted to say that he's back to acting like a normal sheep again! I believe small miracles happen all the time, even to sheep!
We are told that Mikko's life expectancy will only be for another 6 months or so. We are spoiling him and giving him the best life we can. He loves to have his back scratched so we are happy to do that for him every day. It is a bittersweet story. One day we will have to say good-bye.

Posted by Kris Miller at 7:47 PM No comments: 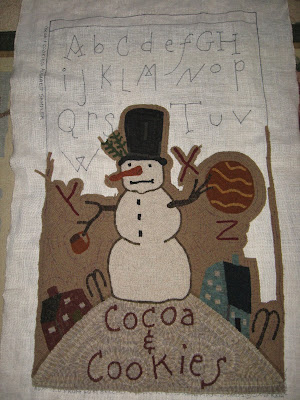 First, let me say this: I am not a "fast" rug hooker! But the middle of December came along and I wanted to start hooking something festive for the season...something that would definitely put me in the holiday spirit. I decided to start working on Cocoa & Cookies Alphabet Sampler, a charming pattern which is an adaptation of a note card by Lori Brechlin from Notforgotten Farm. I started hooking this just about 3 weeks ago and look how far I have gotten (remember, I'm not real fast)! The pattern is approximately 26" x 43.5" and I'm hooking it in #8.5 strips. The color plan literally fell into place. This is a really fun rug to hook! Don't you love the wonky little houses on the hill? And who knew that a snowman could have a cute little chin? The pattern is available through my website www.spruceridgestudios.com.
I'm flying out tomorrow to visit my sister in Nashville for a week so my rug will have to wait until I get back. I'll be anxious to finish it when I get home! I'll be sure to post a picture of the finished rug once the last loop is in place.
Posted by Kris Miller at 12:47 AM 1 comment: 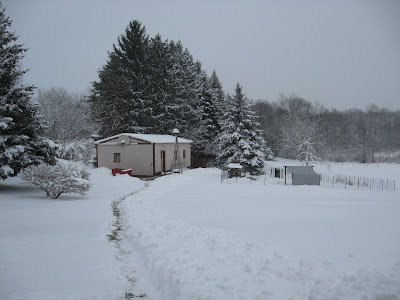 We woke up to a new year and 12 inches of beautiful, white, picture perfect snow. I love snow! I think that is why I love to live in Michigan. Here is a snapshot looking out my back door at all the snowy splendour! Ken had to dig a path down to the barn so we could feed the animals. You can see the ridge of evergreens behind the pole barn that stores our hay...that is why we call ourselves Spruce Ridge Studios! On the right is the sheep pen and beyond that is our pond (but it's hard to see because of the snow cover) My boys walked out on the ice the other day and are anxiously hoping they can strap on their hockey skates soon!