My poor little studio has undergone many changes over the years.  I started out in a corner of our walk-out basement with just a few shelves of wool and a couple of baskets of patterns. As the years went on, we expanded that space so it was larger and walled off from the rest of the family room space and then finally, rug hooking took over most of it.  I've had classes and open houses and allowed shoppers to come shop by appointment.  But as I accumulated more and more merchandise and traveled to teach at workshops and camps, my studio truly turned into more of a work/storage space and less of a "shopping" space.
Right now I can't even bring myself to post a picture of my studio because it has been overtaken with bolts of wool, rolls of foundation cloth, shelves and drawers of patterns, and merchandise stacked up to be packed for the next show.  I have longed for a place that can be my "store," so people can come and shop and put their hands on all this wonderful wool that I have to offer.  A place that I can keep merchandise displayed and it won't get moved or packed up because it is "pattern drawing day."

But good news is coming!  Ken and I have been dreaming of turning our little three-season room (breezeway) into a little rug hooking shop and now it will become a reality!

So much was needed to be done!  New windows, new flooring, new electrical, adding insulation and siding and heating vents.  Raising the ceiling and painting.  Ken has decided to tackle most of it himself.  You probably know how much we travel so it has taken a while....but we think it should be operational this summer.  Fingers crossed!
I've taken some pictures of the progress so here they are: 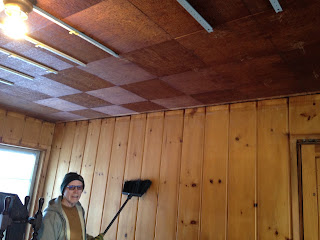 Just about a year ago, Ken started to remove the drop ceiling.  He also started replacing the windows. 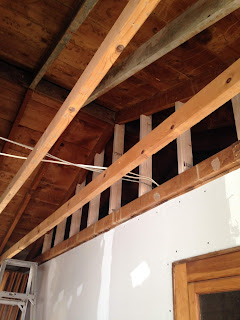 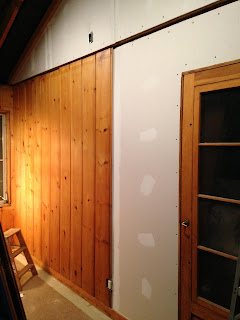 New dry wall was installed and the original knotty pine paneling was put back up. 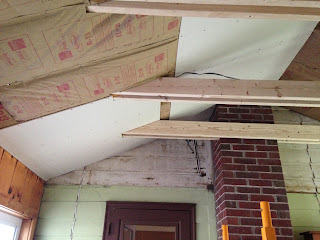 Insulation and dry wall goes on the raised ceiling space.  The old siding on our house was kind of cool but not in good condition to leave it exposed. 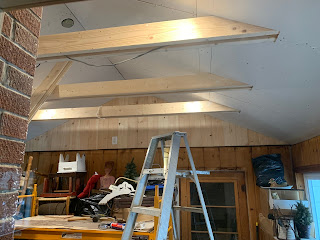 Ceiling is drywalled and new lighting is functional. 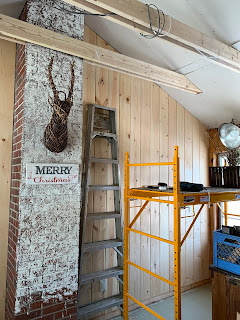 New pine paneling is going up over the old siding.  Ken experimented with covering the brick but it didn't work out to his satisfaction so now our plan is to mortar wash the brick to make it looked old and reclaimed.
Ken did a little Christmas decorating in his construction zone...haha! 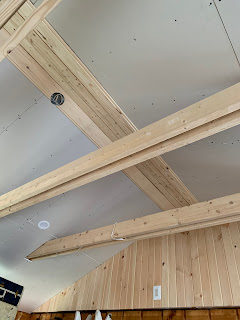 We were inspired by a friend's wood paneled ceiling so Ken has installed shiplap on the ceiling. 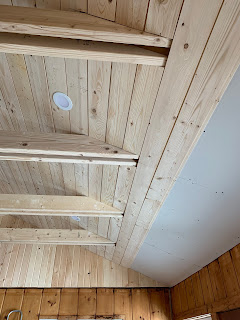 Progress is made...he had to cut around all the ceiling beams and lights! 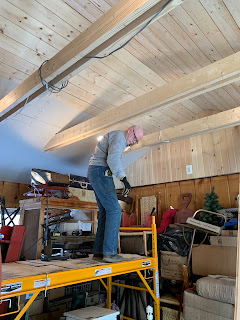 He's almost finished!  You can see he uses a scaffold to reach the high spots...and you can see all our junky treasures piled up during the construction. Some of that stuff has got to go!
We will white-wash the pine paneling to give it a light, airy look.

So, you see, slowly but surely Ken is getting things done.  There is still painting to be done but we have to wait for the heat to be installed....coming in 2 weeks!  And then perhaps the flooring is next.  Whew!

Last October, I hosted and also taught a class at the Historic Franklin Rug Hooking Retreat in Franklin, Tennessee. My students were really quite wonderful....and very understanding, since I was splitting some of my time with the administrative end of running a rug camp.  My husband and my sister took a lot of the burden off of me, however, and I am forever grateful for that!
One of my students wanted to hook Ghost Genie, which is a design that is adapted by the whimsical folk art of Johanna Parker.  Johanna was born on Halloween and I have to say that she is the "Queen" of Halloween, too!  Her original design uses the traditional Halloween colors of orange and black. 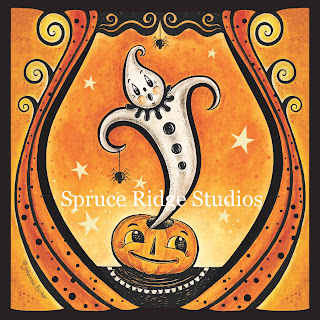 But my student requested no orange in her color planning.
"What could I do?" I thought to myself.
Not even an orange pumpkin?
So I thought "Aha! Purple!"

I dyed up some textured woolens in several different values of purple.  I also had an as-is texture that was lighter purple so I thought that it would work for the background.  I couldn't think of anything else but a green pumpkin and I especially love those dusky bluish-green pumpkins like the picture below.  Apparently this one is called a Jarrahdale pumpkin, an heirloom variety from New Zealand. 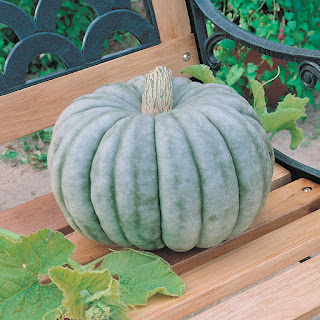 Lucky for me, Marion loved my color suggestions and she was off to the races!  She hooked A LOT during our rug camp and had an impressive amount hooked by the time we did the "throw-down" on the last day of camp. 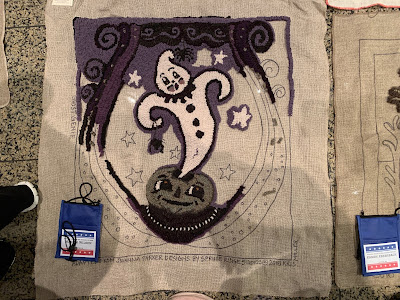 It was turning out just the way I had envisioned it but honestly, Marion's lovely hooking style made this rug shine and it was one of the favorites at the rug camp.

Just recently, Marion emailed me a picture of her finished rug.
The green pumpkin is superb and I love how she used the same green for the dots in the scrolls.  It marches the color around the rug and adds that special spark to make it interesting.
"I absolutely love it" she wrote.
Wow, I love it too!!! 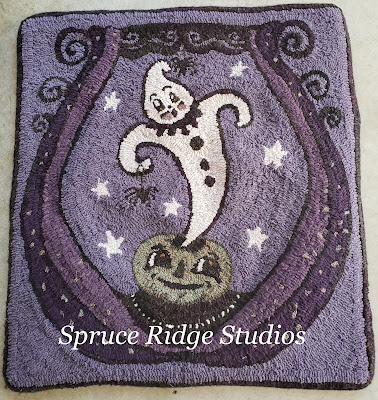 Just a P.S. about the ice storm I mentioned in my last post....we never got the tons of ice like the weatherman predicted but we did get TONS of rain.  We thought it had affected the pump on our well but upon inspection from the well company, we had a leak or break in the main pipe supply to our house.  The pipe was cemented into our foundation and the water was leaking somewhere in the cement.  Ugh.  So we had to have a major re-route of the pipe line which involved drilling into the foundation and floor.  I did not start my Give Ye Thanks rug after all but it is still waiting for me.  I have a different rug on my frame in the meantime...but that is a story for another post.
Have a great week-end!