As promised, here are a few more pictures of rugs in progress at the 2009 Wool Sisters Camp. Our theme was "It's Fall, Y'all." So you'll notice that there were a lot of Halloween themes as well as fall. 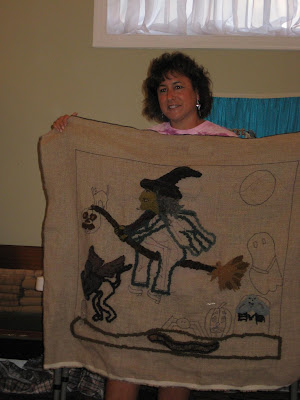 Nancy is working on one of her own designs which included pumpkins, a spider, a ghost, gravestone (of Elvis), a flying monkey, and a really cool witch on a broom. She used gray sheep's fleece for the witch's hair which made the witch look....witchy!! 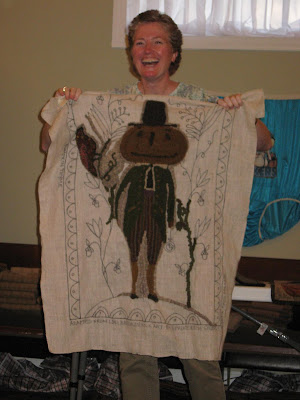 Sue was hooking Pumpkin Thyme, a Notforgotten Farm adaptation. I love his striped pants! We thought he looked very dapper. 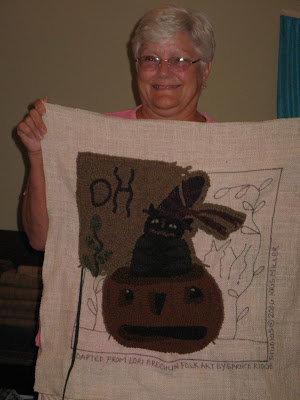 Libby is hooking Oh My!, another Notforgotten Farm adaptation. The photo is a little dark but the cat is wearing a marvelous purple hat. 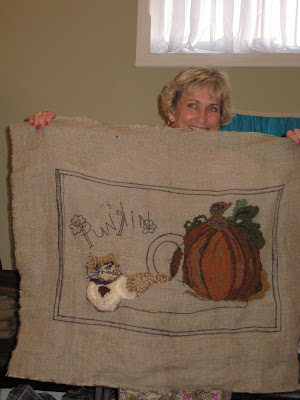 Kathy designed her own rug which is a tribute to her cat Punkin. Her hooked pumpkin was turning out wonderful and I can't wait to see how her cat turns out. 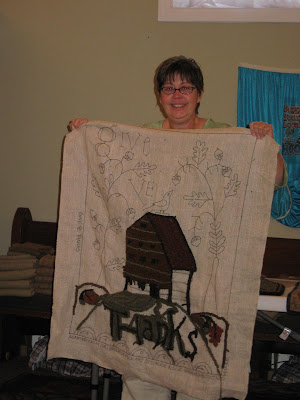 Ginger is hooking Give Ye Thanks, a Notforgotten Farm adaptation. Her cabin is turning out great, don't you think? 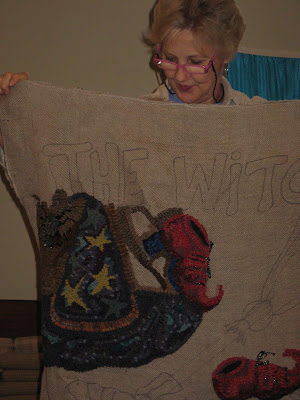 Charlotte is hooking "The Witch Is In" which I believe is a rug that she designed herself. She was using some great embellishments with craft cord such as sparkly shoe laces. If you look closely in the upper left hand corner, you can see her spooky spider...it looks like it has glowing eyes!!! The witch's hat is terrific too.
~~~~
We're not done yet!
I still have more photos which I hope to post again very soon!
Posted by Kris Miller at 8:27 PM 2 comments:

Happy Father's Day to my dad 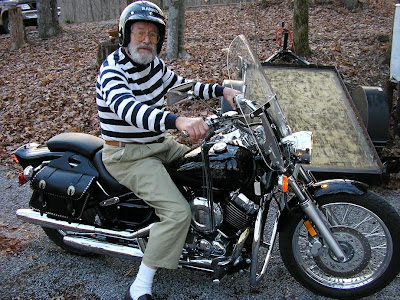 Here is my dad who is 82 years young and rides a motorcycle!
~~~
My dad is my inspiration and my kindred spirit. He lives his life creatively and I am like him in so many ways. He taught me how to fish and paddle a canoe. Many summer days were spent camping and exploring. When I was 14, he and my mom pulled all of us kids out of school for 6 weeks so we could go see a total eclipse of the sun in the Mexican wilderness. It was a better education than regular school as we learned about astronomy, visited Mexican (Aztec and Mayan) ruins and pyramids, and learned about and experienced the Mexican culture. I was one lucky kid! No, my parents were not "hippies", they were the most straight-laced folks I ever knew.
~~~
Thanks, Dad, for giving me your creative "genes", your eye to see things a little differently, and the wings to fly as an individual.
~~~
I love you!
Posted by Kris Miller at 11:14 AM No comments:

I was in Odenville, Alabama last week-end with Wendy Miller from The Red Saltbox. We were team-teaching a workshop for the Wool Sisters group from Tennessee (although some of their members come from other states too). OK, the gals warned me that they were a little crazy...well, yes, they were, but they didn't scare me...I just laughed right along with them!!! What amazed me the most is the fact that everyone was so productive during the three days we met. I believe there were no less than 5 rugs completely hooked during our retreat and those who finished began hooking on a second project!!! Yowza!! That's a record for any workshop that I've ever taught at...
~~~~
Need I say that the food was exceptional??? All home-cooked Southern style! Yum. I think I ate dessert twice a day. Oh, well, except for the day that we had Banana Pudding. I had several helpings of that. Ask Ginger and she'll tell you it's true.... I can be bribed to do just about anything for a bowl of Banana Pudding. So she made sure that I got my fill.
~~~~
Here's some pictures of the participants and their rugs. I thought that today I'd post some of the rugs that got finished at the retreat and show some more pictures tomorrow. Be prepared to be dazzled! 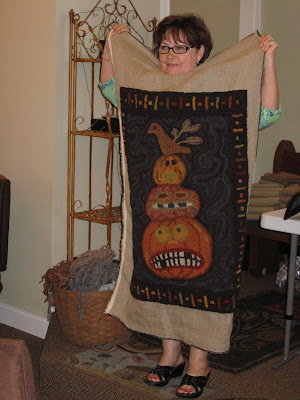 The picture above is Melanie holding her completed rug. As you can tell, this was no small project. Love the border. 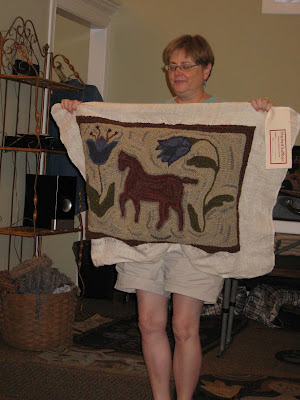 Here is Penny with her finished rug. It's a Red Saltbox pattern. I love the colors she used...nice and old looking. 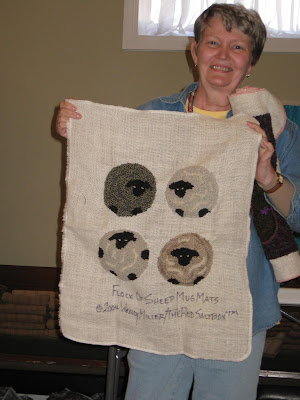 Here's Merry holding her sheep "mug mats". This is a pattern also from The Red Saltbox. Cute!
Here are Carrie (L), Megan (C), and Linda (R). Carrie and Megan's rugs are completed. Megan is holding a portrait of her dog and I believe this is her first hooked rug! Linda is working on a dimensional project (a downward view of a sidewalk) and is experimenting by adding sculpting, needle felting and couching to her rug. Pretty impressive trio of gals, wouldn't you say? 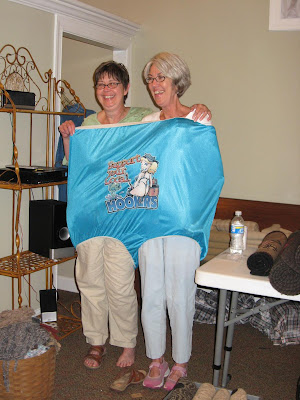 I think these big panties are a real hoot! They were hanging on the wall during our workshop but on the last night, Ginger (L) and her sister Bobbie (R) decided to model them. The saying on the front: "Support Your Local Hookers."
~~~
The next photo may be disturbing to some people..... 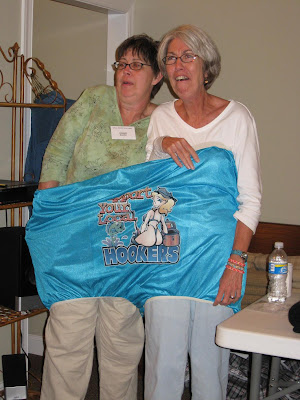 Emma would like to say "thank you" to all of you who came to the tent sale yesterday! 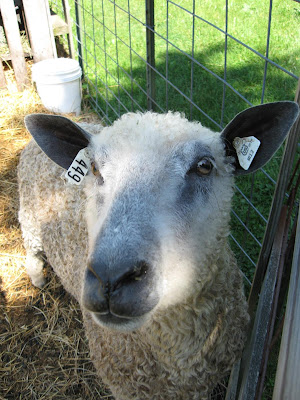 When the first shoppers showed up, Emma made sure they all felt welcome by greeting them with some sheep chatter.
~~~
It was a beautiful sunny day and we had fun! And those who came found some great treasures to take home.
Thank you to all!!!
(P.S. to Suzanne: the display mannequin is still here if you still "need" it ... )
Posted by Kris Miller at 8:01 PM 1 comment:

Here's just a couple of the treasures that will be available at my tent sale this Saturday: 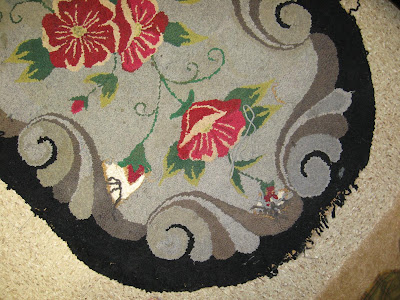 This old rug shows a lot of wear and needs some TLC! However, it's still a great primitive floral design and I think the scroll border is fabulous! I have a couple other tattered old rugs that are waiting for new homes. Maybe they can be "re-purposed" into other things...maybe trimmed and used as a top cover for an old bench? 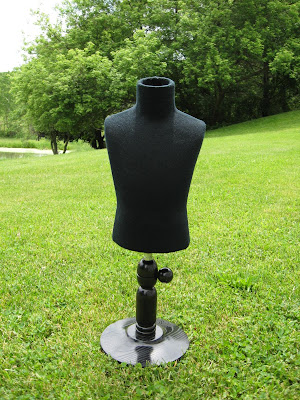 Look at this cute little display mannequin! It is in excellent condition. The body is covered with black knit and the height is adjustable. This is a wonderful piece to display jewelry or knitwear! 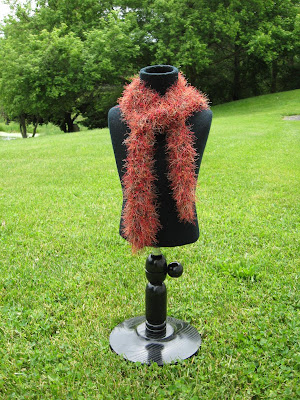 There is so much more! I have been finding lots of treasures every day: books, rug hooking patterns, bolt wool, overdyed fat quarters, pieces of linen and monks cloth, a few punch needle supplies, sewing fabric, yarn, buttons, roving, a treadle sewing machine (it's in good condition and it works too!), and a variety of other vintage collectibles.
The sale starts at 10 am sharp...don't come early or I'll make you wait in your car... *wink*wink*
My studio will be open all day for regular sales too!
Posted by Kris Miller at 1:30 PM 3 comments:
Newer Posts Older Posts Home
Subscribe to: Posts (Atom)