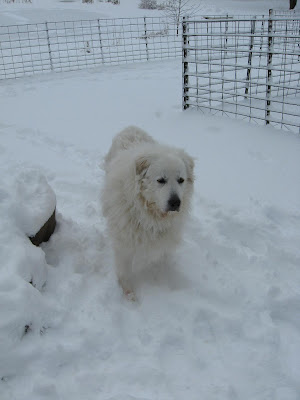 Yesterday was Nokie's 10th birthday! She is my Great Pyranees guard dog and she's a big girl who weighs in at 125 lbs. Even though she is advancing in years, she still has the heart and soul of a pup. We adopted her from the Great Pyranees Rescue Society 4 years ago. Nokie and I have learned a lot about each other since she came to live here. I had lots of ideas of keeping her outside to guard the sheep.... she had lots of ideas of sleeping on the sofa in the house! She was raised a "city-dog" so she had never seen a sheep or a goat until she came to live on our little farm. It turned out that she didn't like the sheep very much. She found they were easily intimidated so she had fun chasing them around and around their pen. I had to remind her that her duty was to guard the sheep and not to herd them! When she got bored with the sheep, she just sat and barked. Needless to say, the neighbors were not too happy about the barking. So I decided to put her in with the goats. The goats were not intimidated at all... as a matter of fact, the first thing they did was knock Nokie down! They were not going to put up with any nonsense from a dog! And a curious thing happened....Nokie loves the goats. She loves to go down to the goat pen with me to feed them. She will lay right down amongst them. She follows them around. She drinks out of their water bucket. She has tried to lick them a time or two. And true to her guardian personality, she is very protective of them. If Ken or I try to catch one of the goats, she will position herself in between us and the goat so we can not get close. She has found her purpose in life.
Nokie and I understand each other a lot better now. She knows she can not bark incessantly without a reason (rule #1: only bark at the "bad guys") and she needs to be kind to the goats (rule #2: no chasing the goats) (rule #3: no nipping at them). I know I can't make a city-dog sleep outside all night....she has a sofa to sleep on in my breezeway and a dog biscuit every morning.
Happy Birthday, Big Girl!!!
P.S. As you can tell from her photo, she is not fond of having her picture taken!
Posted by Kris Miller at 9:44 PM No comments:

Bright cheery color on a gray and snowy day 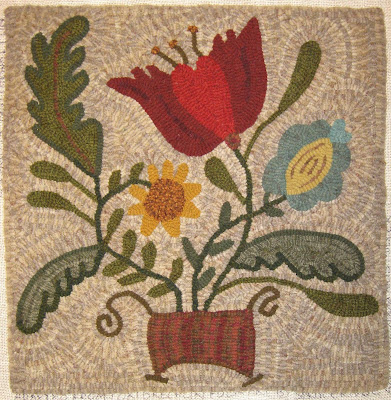 The snow is swirling and blowing around. The roads are snow-covered and slippery. It is another gray and cold day here in Michigan.....but I have a bright spot to beat the winter blahs. It is the beautiful flowers in my hooking! Here is my latest project, just completed and ready for hemming. This is Not Forgotten Flowers, an adaptation of a Lori Brechlin note card design. It's available on my website (www.spruceridgestudios.com). I hooked this with all textured wools. I particularly like the big red flower....sort of like a bright Valentine! I've already started hooking another rug...keep checking back to see what's on my frame now!
Posted by Kris Miller at 5:50 PM No comments: 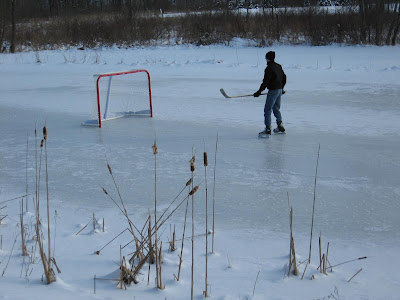 Brrrrr....it's 12 degrees....but a perfect afternoon to strap on the skates and shoot a few pucks. Hey, Kevin, where'd the puck go??? 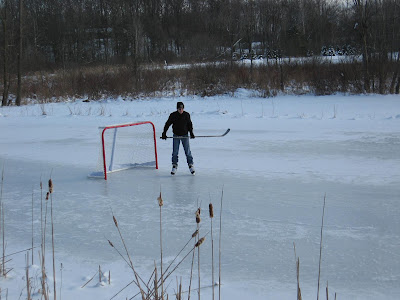 Michigan has definitely been in the deep freeze for the past two days. What a better way to take advantage of a cold sunny day than to get out on the ice. Tomorrow we are expecting more snow!

Posted by Kris Miller at 5:19 PM No comments: 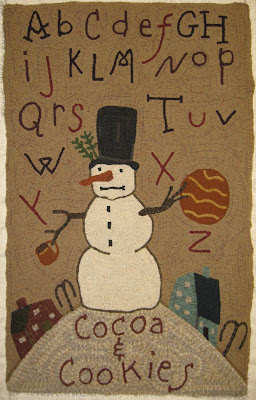 As promised, here is a picture of my finished rug! The last loops were pulled up on Friday night...umm...should I say perhaps Saturday morning during the wee hours?!? Yup, when I get inspired, I have been known to stay up until 1 am...2 am... or 3 am!!! The rug still needs to be steamed and hemmed but I've already started another hooking project. I'd rather be hooking than hemming!

A large stray dog came by the animal pens today; he had no collar or identification. He was young and exuberant and bounded in circles around and around the pens. Sequoia gathered his little herd into a group for protection and the sheep stamped their feet and then fled in terror. The animal control officer arrived and took this pup to "Puppy Jail". How sad. We have had several recent dog attacks in our county and dog owners should be mindful to keep their dogs under control.

Another snowy day in Michigan! 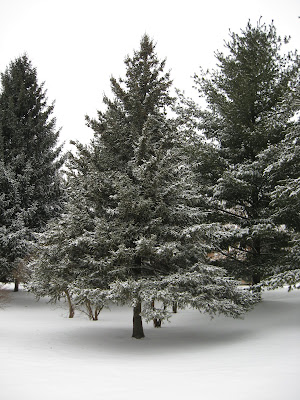 Ho hum! Another snowy day here in Michigan! I think this is our third biggest snow of the winter season, although we only received 5 inches of snow instead of the predicted 10 inches. Our neighbor came by on his tractor and plowed our driveway for us, wasn't that nice? Thanks, Mr. Richardson! 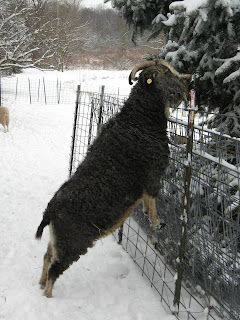 Sequoia
The goats certainly love a nice heavy snowfall. It weighs down the spruce branches so they can climb the fence and grab a tasty snack! Sequoia is 8 years old and he is the "alpha" goat of the herd. He is definitely the boss but also a good protector to the rest of the group. When we got him, he was very small and scraggly. I worried because the bigger goats picked on him all the time. Now he weighs 150 pounds and he rules the herd! Just a lesson for all the "little" people out there..."the greatest oak was once a little nut who held its ground."