Need I say that it's c-c-c-old here in Michigan? This morning it was -9 degrees when I went out to feed the woolly critters. Yes, that's MINUS NINE DEGREES! I also noticed this morning that a beautiful shimmery frost had covered a lot of the branches, along with the snow. The sun came out and the frost didn't last long. But for a brief time, it looked just like a winter scene from a Christmas card! Here are some branches on our burning bush: 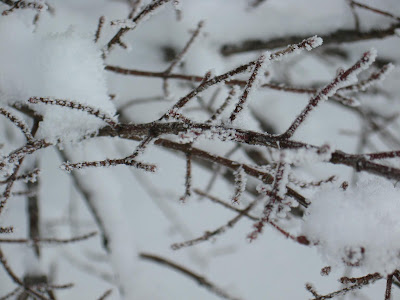 A lovely snapshot of one of our pine trees... 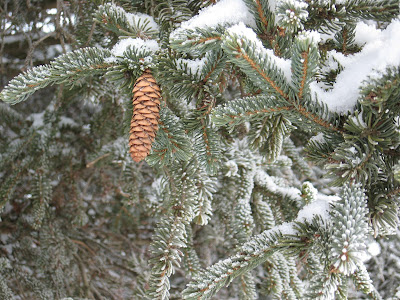 Here is the frost on the pine branches...simply beautiful! 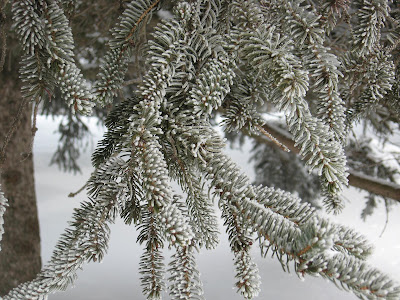 The animals seem to be coping with the extreme cold by digging in the straw and forming little "nests" where they snuggle down to keep their legs warm. It's amazing that their ears don't get frostbite! Me? Well, you'd laugh if you could see me bundled up in my "gear". A turtle neck, a sweatshirt, three pairs of socks, big snow boots, a Carhartt insulated suit with a hood, double insulated gloves, and an old lambswool scarf tied double around my neck. And I dress like that and brave the cold twice a day to feed my sheep and goats. Ah, for the love of wool!!!
Posted by Kris Miller at 11:48 PM No comments: 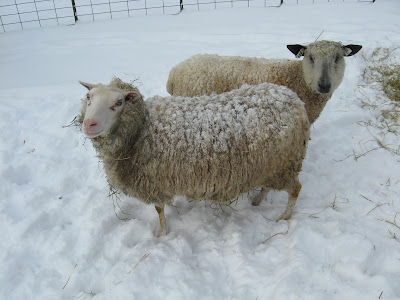 Happy New Year! Well, I think it's hardly considered the New Year any more. Everyone is getting back into their old routines. Here in Michigan, nothing has changed....not even the weather. It snowed all day yesterday. It was a constant, dense snow with small flakes. That's the kind that piles up fast, and that's exactly what it did...pile up.
Funny thing, the sheep have had ravenous appetites. My hay grower, Paul, told me last summer that when their appetites increase enormously like that, it means there is much colder weather on the way. And sure enough, the weather gurus are now predicting sub-zero temps later on this week. I could have predicted it at least two weeks ago.
Anyway, as the snow was coming down, Lumi was digging through the snow, looking for bits of left-over hay to snack on. She got quite a crusty coat of snow on the top of her back. Kevin said, "Mom, she looks like a Frosted Mini-Wheat". To which I answered, "yes, and she's loaded with fiber too".
***
That's your dumb sheep joke of the week!
Posted by Kris Miller at 1:27 PM 2 comments:
Newer Posts Older Posts Home
Subscribe to: Posts (Atom)