Rug Of The Day - Little Fox 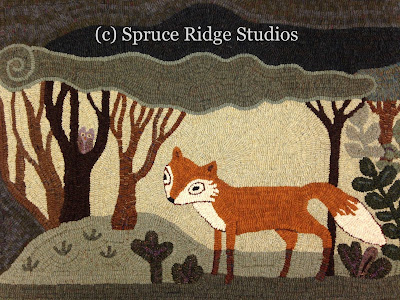 I seem to be creating a theme of peaceful and calm this week, which we all need right now!

Little Fox is probably one of my most favorite rugs.  We have a fox that lives in the back of our property that I affectionately call Jamie Fox.  Sometimes we don't see her for a while and then she shows up again.  Sometimes she has had a litter of kits and she lets them play in the grass where we can see them in the evening.  She has never bothered my farm critters but she does like to tease my dog by sitting in her line of sight but being too far away for my dog to do anything about it.

My color plan happened quite by accident....I had ordered some wool and had it stacked up on my work table.  I began to move the pieces of wool around to see how they worked together the best.  I added a piece or two from the wool I already had in stock and I was so excited about the color way that I created, I had to take a picture with my phone so I wouldn't forget what order they were in!  I wanted a very tranquil and quiet forest scene but I also wanted the fox to be the star of the rug.  The burnished orange was the perfect choice.  I had to do some small pop-out lines around the light areas of the fox so they would get lifted up from the background.  You could see them but the small accent line just made everything look more defined.

The last little detail that I had to think about was the owl.  If I hooked him in brown colors, he would not be seen because of the tree colors.  I think he is so whimsical, sitting in the crotch of the tree and he needed to be seen!  So I grabbed a couple of small purple scraps and hooked them for his body.  The eyes were each just one loop of a #8.5 cut (pull up an end, hook a loop, pull up the other end).  I'll let you in on a little secret of how I created the black dot in his eyes....after I hooked the 8.5 strip, I went back with a needle and black thread and carefully stitched a small dot onto the loop. Perfect solution for those tiny eyes!

Here is the link to purchase the pattern:
https://www.spruceridgestudios.com/product/little-fox-32-x-23-25/

Have a great week-end!
Posted by Kris Miller at 1:56 PM