Rug of the Day (and a demo on steaming)-December 31st.

Here is a brand new rug that is hot off my rug hooking frame.  I finished it up last night and needed to give it a good steaming.  It is my adaptation/interpretation of an antique rug.  I tried to stay true to the original color plan. 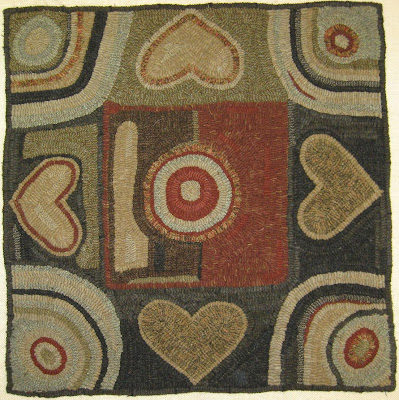 The size is about 25 x 25.  I hooked this in all #9 cuts (my new favorite cut!!!)  Even though I don't crowd my loops and I do leave enough spacing in between rows, my edges always curl. 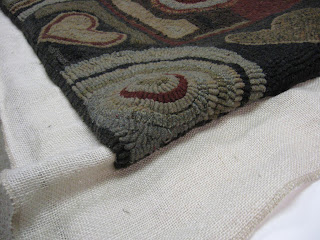 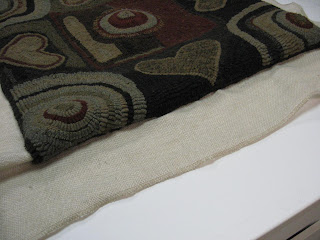 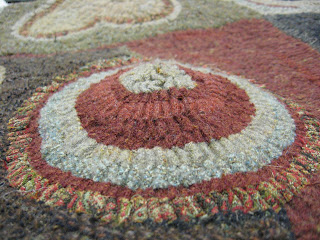 The center circle won't lay flat either; it's sticking up and it looks like a dome.
I never worry about this because I know I can steam it out easily with my Eurosteam Iron.  Maria Barton from Star Rug Company raved about this iron in one of her blog posts and I have gotten several e-mails inquiring about it, so I'd like to show you how it works! 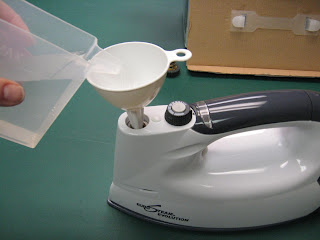 First fill the iron with the recommended amount of water.  You get the funnel and pouring pitcher with the iron.  You never want to overfill because it will cause spitting. 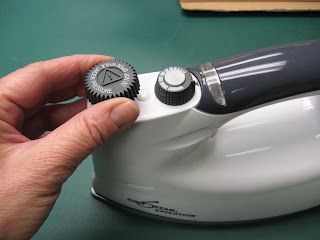 Close the top cap of the iron tightly.  They actually give you a little red gizmo to do that.  Now you plug it in and turn it on.  Set it on the little gray rubber mat that is provided.  You're going to heat it up laying flat (you never rest the iron on its heel like a regular clothes iron).  Make sure it's on a safe surface because it will get hot (there is no temperature setting-you just turn it on).  I let it preheat for about 5 minutes or until the little orange light goes out. 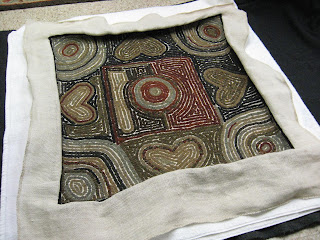 While the iron is heating up, I prepare my pressing space.  I put a couple of old wool blankets down as a base and then place a towel on top of that.  I lay my rug out on top of all those layers, wrong side up.  Look at those edges!  They will not lay flat!

When the iron is ready, I hold it over my rug and press the small white button that's in the middle of the gray button.  This will give you a burst of steam: 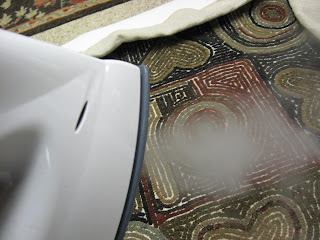 Wow!  Look at that steam come out!
You can also turn the gray button to get continuous steam, but you will run out of steam faster that way.  I like to control the steam by using the white button. 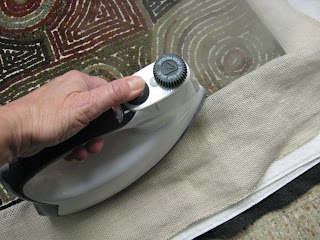 I first tackle those pesky curled edges.  NOTICE I AM NOT USING A PRESS CLOTH NOR A DAMP CLOTH!  I press the iron right on the rug and hit the steam button.  You do not have to press hard and there won't be any press marks. 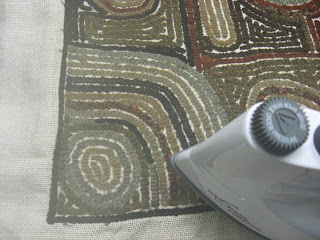 I'm working around the rug to get it flat.  Once I get the edges down, I start working into the rest of the rug. 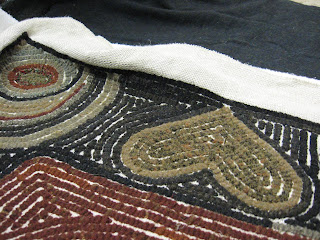 Here is a shot to show you the flattened edge (on the right) vs. the curled edge that hasn't been steamed yet (on the left). 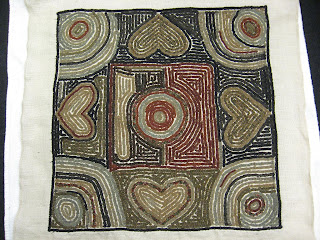 Here is the back of the rug, completely steamed and flat.  This took me no more that 5 minutes at the most.  Seriously. 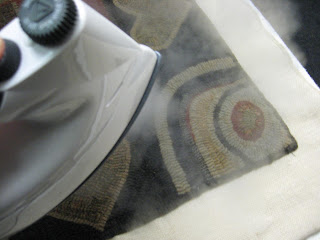 I flip the rug over and begin to steam the front.  It doesn't need as much work, but for this particular rug, I am concentrating on the circles since they tend to pop up. 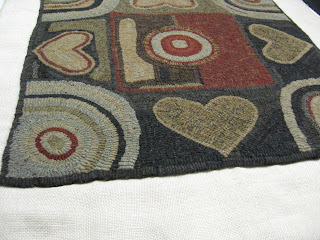 The front is steamed and completely flat.  No more curled edges!  The front took me no more than about 3 minutes to complete. Seriously!
I still have some steam left in the iron.  However, I turned it off and I am letting it cool completely before I empty out the excess water.  Remember, the steam works under pressure like a pressure cooker.  You want it to cool off first and release the pressure by pushing the button before you open it up to empty it. 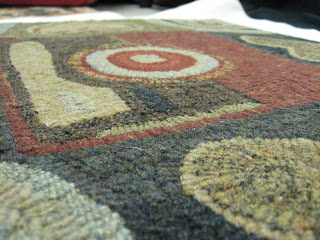 Remember the center circle?  Now it's as flat as a pancake!  Yay!
~~~
I have the Eurosteam Iron in stock.  They cost $200.00 and shipping is extra.  I would have never thought that I would spend that much on an iron, but I have used mine often and I'm a believer.  No more press cloth and it cuts your steaming time in half!  I have also used it to steam my linen pants and tops.  You can actually steam them right on the hanger if you want!
~~~
Happy New Year everyone!
Posted by Kris Miller at 3:35 PM

Neat pattern and I love your colors!!!AND YOU USED A 9 cut, WOW, I am impressed. I have one of the irons and it does work great.
Kaye

I'm not usually drawn to hearts, but I really like this pattern. Amazing little steamer! :-)

Yes, Michelle, I am the same...not a huge fan of hearts...but all the funky antique shapes sort of off-set all of that!

Kris,
I WANT AN IRON!! Guess I'll have to save up for one. Wow, not to have to use a pressing cloth would be awesome!
And your rug is fantastic!! I love the colors and how you hooked it. Are you selling the pattern? I love hooking with 9 cuts too. I'm not a huge heart person either but you are right, all the other shapes sort of balances it out and the eye isn't just drawn to the hearts.
Wishing you and yours a healthy 2012 filled with many blessings. Lori

Kris ~
LOVE, LOVE, LOVE your rug. I started doing a punch needle version of that pattern a few months ago, but somehow it fell by the wayside.
Happy New Year to you, hubby and all your furbabies.
Pug hugs :)
Lauren

I do love both the pattern and the iron. I have had the iron for some time, and wouldn't be able to finish a rug without it. I hope the pattern becomes available through your website. I hope you have a fantastic 2012. Donna

Thanks for this educational post. I'm new to rug hooking and this is information I can use.

Love your rug and can't wait for my iron to arrive, I sent you an email. Happy New Year!

Thanks - I love that iron, never hurts to see it in action
Great iron - a must have
Polly