Rug Of The Day - Farmhouse Geometric 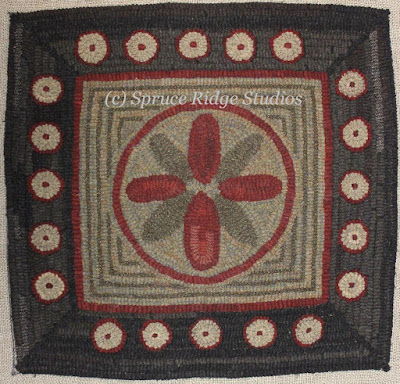 One of the many reasons I was attracted to learn the art of rug hooking was antique hooked rugs and their whimsical designs.  I don't remember one specific rug that triggered my love for them but I knew they were out there and they spoke to my heart.  What was the story behind their design?  Whose clothes were hooked into the rug?  Where did they use the rug when it was finished?

When I first saw this particular antique rug, I thought it would be an interesting small project to hook.  I don't know the size of the original one, but I decided to make mine suitable for a large cut of wool.  While working on it, I started to daydream and make up a little story about how the creator drew out her rug.  The circle in the center is about as big as a dinner plate, so maybe she plopped one of her plates down on her foundation and traced around it.  She followed the threads in her burlap and drew a square.  Were the center petals inspired by a compass rose?  Maybe a quilt pattern?  The circles outside the square remind me of spools....maybe she was a seamstress and traced around the ends of her thread spools to create the border.  Old black dresses became the hooking material for the border but because red was a special fabric, she saved them for the center and a few special spots in her rug.  Maybe the khaki fabric was from a uniform or work shirt.

I decided to name my adaptation Farmhouse Geometric.  In my daydream, the rug maker lived on a farm, in a house that her husband built.  She tended the chickens, helped milk the cows, raised a large family.  She sewed clothes and quilts for her children.  Maybe she made the best bread and biscuits that anyone had ever tasted.  Her hands were worn and tired but she found time in the evening to create something beautiful.  I wish I could have met her.

Kris, it is like you have read my mind or perhaps we are just like-minded. But when hooking an antique rug I also make up a story in my mind. When I find an antique rug on an auction site wonder what special meaning it had that the bird was larger than the house, or there was a heart close to a primitive chicken.....was that a good laying hen or prize hen? Enjoyed your blog post.