I was honored to be a teacher at the Ohio Rug Camp last week and despite the dreary weather, we had a terrific time!  In hindsight, I wish I would have taken some time to get a few pictures of my class....they were all such wonderful students!  However if you click on this link to Andrea's blog, you will see a few pictures of what folks were working on (scroll down to the Ohio Rug Camp post, then there are several entries after that).
I did enjoy the rug show that was laid out for the campers and the public to enjoy.  I took a few pictures of Spruce Ridge Studios patterns and here they are: 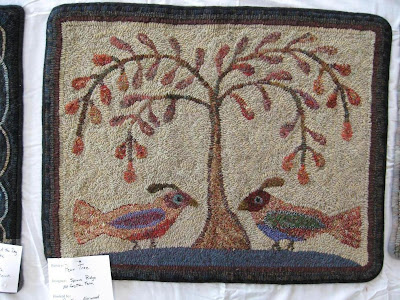 This little glowing gem was hooked by Cynthia Norwood.  This is Pear Tree (AKA Yuletide...because you can order it to say either of these phrases), an adaptation of Lori Brechlin's folk art by Spruce Ridge Studios.  Cynthia chose not to hook the words.  The reason why it glows is because Cynthia used a multitude of antique paisley in this rug.  Here's a close-up of some of the paisley pears: 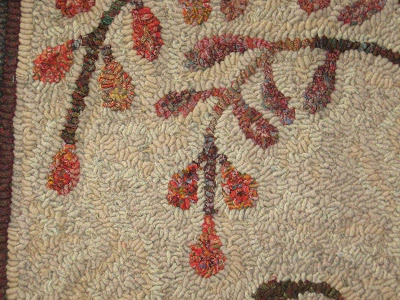 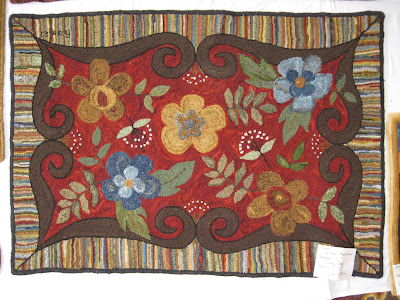 This is Conquest of Queen Anne, a Cindi Gay design, hooked by Janet Watson.  This rug is very near and dear to my heart because I helped Janet with most of the color planning last June at her guild's rug camp at Cherry Valley Lodge.  I must admit, I was a little concerned when Janet announced that she wanted a red background!  But the end result is another stunning rug! 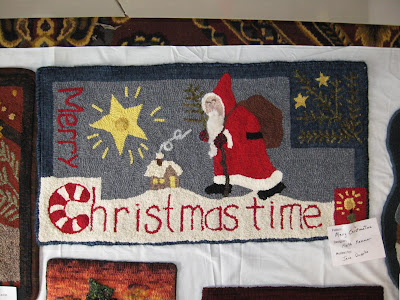 This is Merry Christmastime, a Keith Kemmer design, and hooked by Jane Doppke.  Jane is a relatively new rug hooker but so far, she is doing a terrific job!  The most wonderful thing about this rug is that Jane hooked some nubby yarn to represent the snow.  I don't think it shows up in the picture as nicely as it did in person.  Also note the roving beard on Santa. 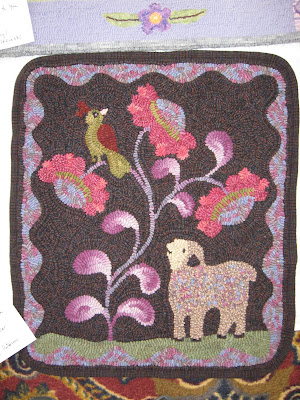 And lastly, here is Emma's Garden hooked by Judy Paterson.  This is not a typical color plan that you would expect for this rug but I LOVE it!  Here is a close-up of the little sheep: 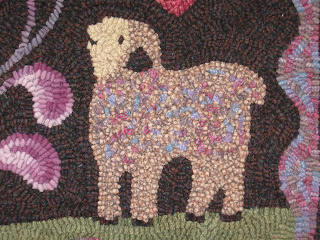 What a sweet little lamb!
~~~~
I am now working like a mad woman to get ready for the Maryland Sheep and Wool Festival which takes place on May 7th and 8th.  I have never been there but have always wanted to go.  It's such a big deal in the sheep/goat world...sort of like going to a Royal Wedding!  LOL!
Posted by Kris Miller at 10:57 AM

Oh I just love all of those rugs ! And I really love the one with the red background! Beautiful. I really need to learn to do this:)

Kris, those rugs are all so beautiful, That little sheep is just adorable. I love it. I'v e checked the other blog too and there are some great rugs there too. JB

Maryland Sheep & Wool is great fun! I went many, many years ago as I worked for a woman who raised sheep, sold the fleeces, dyed the fleeces, spun wool.... the whole deal. Very enjoyable and lots of wonderful wooly animals to look at and admire. ;-)

Love what you and Janet created. Good job on the hit and miss, Janet.

Gorgeous? I love this thecnic and your pattern....I really need to lear ti do this...