Look! There was just one little bird remaining in the nest...but as always, there is a story behind the picture..... 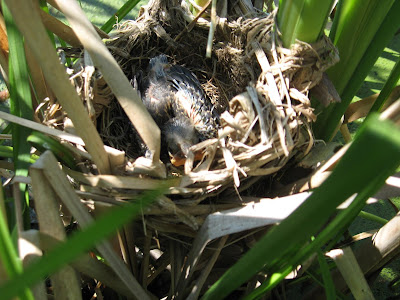 The other evening after I was finished feeding the goats/sheep, I thought I ought to take a peek at the nest to see how the babies were growing and I could see the four little birds crowded in the nest. I gently reached down to pull away some of the reeds to get a better look and suddenly two of the babies fluttered their wings and flew out of the nest and into some of the nearby cattails! I was quite surprised at first and then felt a little guilty that I had disturbed them. I wondered if they'd ever come back to the nest and if Momma Bird was keeping track of where they went.
~~~
This morning when I went out with my camera, there was just one lonely little baby occupying the nest. As I began to look around, I spied another baby bird perched on a cat tail so I moved around to get a better picture. To my amazement, the baby flew off over the pond...but only got about half way across and ran out of "wing-power." Poor baby landed in the water! Then I witnessed an amazing thing...the baby began to flap its wings up and down and it "swam" (sort of like doing a breast stroke) across the surface of the pond until it reached the other side and the safety of more cat tails and reeds!!! Momma Bird dutifully swooped down to check out her young one. Hurray!
~~~
Tonight when I checked the nest, I was expecting to see just one baby bird again. But to my surprise, there were three babies crammed into that small little nest. So I guess they DO come back to the nest at some point. Momma Bird was waiting nearby with a big fat bug. Reminds me of a teenage boy...he is big enough to be off on his own but he always returns home so Mom can feed him!!! Ha!

I'm amazed how fast the babies have grown up to the point they can fly away. guess being a city girl - I've never known it happened so fast! thanks for the enlightenment. Love that Black Cat Society - it's on my NFF wish list - Melody