A recent comment from my friend Saundra made me think that I'd like to write about my wooly family here at Spruce Ridge Studios.  She asked if the picture posted on 1/24/13 was "Stinky."  No, Saundra, that is actually Emma peeking out from the back of the livestock trailer as she was taken to be sheared one spring morn.  She really looked like she was saying "Woe is me!"
~~~
Since Saundra has given me this idea, my first "Meet the Family" post is about Stinky. 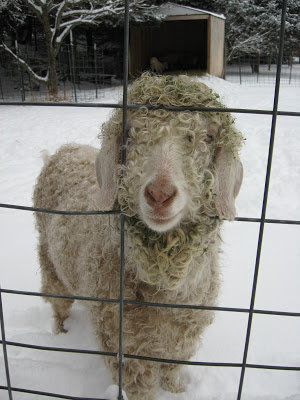 Stinky's real name is Sampson.  We named him Sampson because he is one of the hairiest Angora goats I have ever seen.  Sometimes he grows little curls right on the edges of his ears.  While most goats have their own unique "goat smell", Stinky earned his nickname because he is...well...just really more funky smelling than all the other goats.  I have been told that in the goat world, the smelliest boys are also the sexiest boys and the girl goats love that.  The only thing I can say is that it must be true because the two youngest girl goats follow him everywhere like a harem of beckoning maidens.  Somehow they haven't figured out that he is neutered. I guess he is like a rock star to them!
Stinky is sort of small for a boy.  He is the only goat in my herd that will bite at the other goats if he gets annoyed, not typical for a goat.  When he was younger, he used to sit like a dog, which is another non-typical goat behavior.  Here he is, caught in the act: 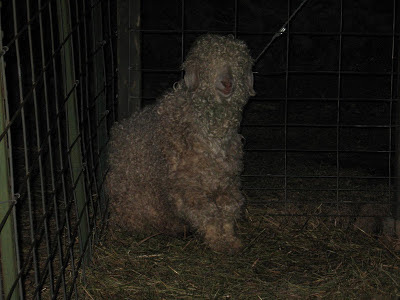 Here's another picture of Stinky in the spring, before shearing.  Poor guy can barely see out of all that hair! You can see what a totally hairy guy he is! We just love Stinky.  He is actually very friendly, good natured and loves to be cuddled...if you can put up with his "natural cologne!"  That ain't Polo he's wearin', honey!

Hi Kris, I love hearing about Stinky and his harem. Wow, he's got lots Angora wool. i can't help but picture all that wool carded and dyes and ready for spinning. I don't spin myself but my daughter does.

Have a nice week.
JB

Kris, thank you for the Stinky update. I had no idea that goats didn't sit like that but come to think of it when seeing them in a field they are either standing or laying flat down. Very interesting, thanks.

Hi Kris! love seeing & hearing about your flock ~ that Stinky is a character!

Ha ha! Love Stinky all wooly and waiting to be sheared!