Mary and Lauren left me comments about my last post...that they would be interested in seeing the progress of my Harvest Goode Things rug. I thought it would be fun to post the progress as a diary and include my thoughts and choices of colors and textures. I'll try to explain why I hooked things the way I did and even explain why I changed things later! This diary will be a little sporadic at first, due to my traveling schedule but my goal is to take you through every step of my hooking process!
~~~
My wools for the Sunflowers are pictured below. The tweed on the left is what sparked the whole color plan for my rug. It looked like sunflower seeds to me and I loved the little blue lines that run through the weave. So I was absolutely sure that I wanted to use that for my flower centers. Then I picked some golds. Yes, it's a traditional looking sunflower but that's OK with me. The gold on the bottom was dyed over Dorr Oatmeal and the one in the center was dyed over a neutral texture that looked like little bricks. I liked the texture of the squares and that gold overdye turned out more subtle and drab than the first one. The green plaid on the top was something that I picked out of my private stash and I had used it in my Lion and Lamb rug. I thought it would make terrific stems for the sunflowers and I liked the fact that it had a blue line running through it.....hmm, recurring color spark might be blue....I'm going to look for more textures with a blue "theme" to them. The wool on the right was another scrap of an drab light olive-green overdye that I had used in a previous rug for leaves. I wanted to use that one again for leaves. I often "carry over" wools from previous rugs into my new projects. It's funny, you can almost follow a common "thread" through my previous rugs by looking at what I carried over and used from one rug to the next. I decided that I was going to try to hook most of this rug in an #8.5 cut but use a #8 cut for letters and smaller details if I needed to. 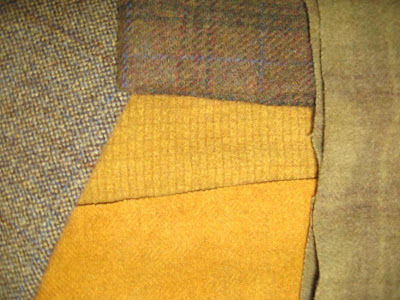 Now here is one of the sunflowers hooked up. I found a tiny scrap of brighter gold/yellow. I only had a few strips! So I used it as an outline around the seed center...gives a little more interest to the flower. The flower petals were hooked using the gold overdyed Dorr Oatmeal. The flowers were smaller so I didn't think they needed an outline. There are four sunflowers in the rug, so I hooked three of them like this one: 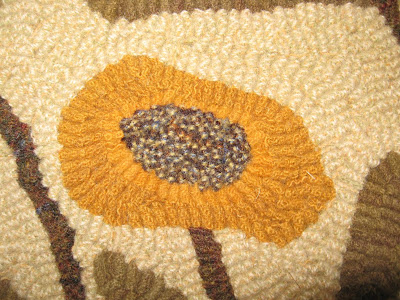 The fourth one was hooked a little differently. I used the brick texture for the flower petals, didn't use the bright gold/yellow to outline the seeds, but outlined the flower itself with the gold overdyed Dorr oatmeal. The flowers all look harmonious but one is just a little different. I like the theory of "odd numbers", therefore the "3 and 1" combination (instead of hooking "2 and 2" of the same color combination--too predictable for my eye). 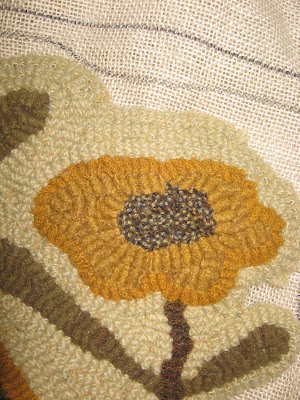 When I was picking out my wools for the sunflowers, I also made the decision that I wanted a light background. This is such a fun and happy rug that I felt a dark background would not be appropriate. I wanted the feeling of light and airy. I actually had a different light texture picked out at first but after I got the flowers hooked into the linen, I decided that the background was just a little too "pinky" and I changed my mind. So much of the color I was using had green tones to them (even the brick-texture looked like a gold which leaned toward green tones). My final choice was a light herringbone that has yellowish green tones. I usually like to blend at least two textures into my background but after looking at how much background there was (not a lot and it's broken up by the house and the flowers), I decided that just using one texture was enough.
~~~
Now a word about my wool: I don't use spot dyes at all. I use all textures, even if they are subtle heathers or overdyed oatmeal, I don't use solid-colored off-the-bolt wool nor do I use swatches nor spot dyes. That's just me. When I look at my very first rugs (and I didn't know WHAT I was doing back then), there are very few spot dyes used. I instinctively reached for textures..plaids, tweeds, herringbones, etc. The love of textures was further enhanced when I took my first class with Barb Carroll. She opened my eyes to the world of texture possibilities and I have never looked back.
~~~
Posted by Kris Miller at 12:24 PM

Kris ~
This is going to be so much fun to follow along. Hopefully I'll learn something through your insights. I have such a hard time color planning and never quite achieve what I had hoped to.
Thank you ;-)
Lauren

Thanks Kris--I love hearing the thoughts of others as they plan their rugs--always a learning process. I give you credit for teaching me the value of using textures--and I love the depth they add to my rugs.
Have fun in all your travels!

This is going to be a wonderful journey! Thanks for letting us all come along! Can't wait to see what's next!!!

I had promised myself that I was going to finish up some of my UFOs but I might just have to pull this one out and get started!!!!